B Is For Boondoggle: $60M Bond-Funded HS Football Stadium To Close
Posted February 28, 2014 by Nathanael Ferguson

The Tyler Morning Telegraph is out with a scathing report on the rapid demise of the glorious new $60,000,000 (yes $60 Million) high school football stadium in Allen, Texas.

A $60 million Texas high school stadium that got national attention for its grandeur and price tag will be shut down indefinitely 18 months after its opening, school district officials said Thursday.

Oh, really? Where ever did they get the money for that shiny new stadium?

Unfortunately, this shiny new but now defunct stadium stands as a stark reminder of why voters should eye shiny new bond proposals with a high degree of suspicion. Not all bonds issues are bad. Not all are boondoggles. But with the rapidly accelerating local debt in Texas, voters default position should be opposition to every new bond proposal. The bar for voting in favor should be very high.

While folks in the Northeast continue to freeze their way through this not very globally warmed winter, there is plenty of cheap fuel available in Texas to help warm them up. Unfortunately due to archaic federal protectionist regulations, there’s no way to get the fuel to them. When we free-marketers talk about unintended consequences of government intervention in the marketplace, this is exactly the type of thing we have in mind.

As freezing weather drained stockpiles of propane to their lowest seasonal level in two decades on the U.S. East Coast this month, shivering New Englanders couldn’t tap abundant supplies sailing out of Texas. They had to look 4,000 miles away to more-expensive heating fuel from Europe.

The reason? The Jones Act, a 94-year-old law that prohibits non-U.S. ships from transporting cargoes between the country’s ports. With pipelines full and not a single eligible propane tanker to deliver fuel from Houston to states such as New York, consumers have had to pay more than $100 a metric ton extra for propane from across the Atlantic.

The Dallas Morning News today is agush with the shocking (shocking!) revelation that conservative groups in Texas oppose wasteful spending and higher taxes. Oh, the humanity! This is hard-hitting investigative journalism at its finest. Woodward and Bernstein would be proud.

Texas electricity regulators and their allies in the power generation industry who have been advocating for a new $4 Billion electricity tax are being stymied by reality as more people realize that Texas doesn’t have a power generation capacity problem. As the Dallas Morning News reports today, there is no power generation capacity crisis. This may come as a big shock to the central planners in Austin, but the free market works. When the balance of supply and demand shifts in favor of new capacity, the generators will build new plants because it suits their interests. Until then, they should refrain from attempting to manipulate the agency rulemaking process to dip into the pocketbooks of Texas electricity ratepayers.

In the long debate over Obamacare there have been many arguments put forward demonstrating why the president’s health insurance policy is wrong and harmful. Compelling arguments have been made citing facts, figures, and studies that prove Obamacare will cause health insurance costs to increase while health care quality diminishes and access dries up. But in the PR wars over Obamacare, well researched white papers didn’t stand a chance against the president’s hopeful platitudes about keeping the doctor and insurance you like all at a lower cost. Only now that the law is being implemented are we finding out the true human cost that all those think-tank white papers tried to warn us about.

Meet Julie Boonstra, introduced to us by AFP. She has cancer and Obamacare is killing her. Literally.

It’s time for Obamacare to be repealed.

There are many who claim voter fraud doesn’t exist, that Voter ID laws are not necessary, and that promoting voter registration integrity is disenfranchising to minority voters. None of that is true, of course. But don’t look for traditional media to do hard hitting investigative journalism to ferret out the truth. For that kind of job we need one James O’Keefe. It’s getting harder and harder to be a voter fraud denier these days.

With the stroke of a pen and without even bothering to consult Congress, the president has raised the minimum wage for workers on federal contracts. It appears one branch of government is more equal than the other branches…

In order for a taxing authority to retain the public trust, if not the public’s respect, the authority must be widely understood to be apolitical and to simply carry out the policy set forth in law. No one likes being taxed but everyone understands that Congress has the power to tax and that by collecting taxes and conducting occasional audits to ensure compliance with the law the IRS is just doing its job as directed by Congress. It’s supposed to work this way year in and year out across administrations regardless of what political party is in power.

Unfortunately, the IRS has lately become a political entity whose activities stretch far beyond the bounds of merely collecting taxes and going after tax cheats. In addition to all of the normal waste, fraud, and abuse of taxpayer dollars that we now routinely expect out of bloated federal agencies, the IRS has entered the political arena by using its audit and tax exempt status granting powers to wage war on organizations and individuals who oppose the administration.

Texas electricity consumers are poised to be hit with a new $4 Billion electricity tax and almost no one even knows it is coming.

Since deregulation of the industry in 2002, electricity in Texas has been sold on the competitive market. This has led to consumer choice and lower rates for most consumers than they would have otherwise paid had the old status quo remained. Rather than being locked into one power provider in their area, most Texans now have an array of providers to choose from. Many choose based on bottom line cost while others consider such factors as length of contract, source of electricity, and a host of other variables. Choice in electricity has been an undeniably good thing for Texas. Our power grid is strong, there is competition in the marketplace, and electric companies are incentivized to provide service at the lowest possible cost.

The Public Utility Commission (PUC) is the state agency charged with regulating utilities in Texas, including power generators. Unfortunately, a majority of the commissioners at the PUC are actively pushing a plan to reregulate the industry by transforming our competitive market into a capacity market. The net effect of this change will be ... 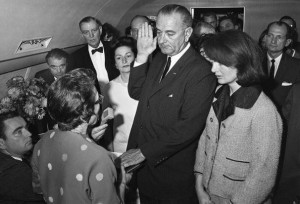 Via the Dallas Morning News there is a fight brewing between Texas and Ohio over the permanent home of the Boeing 707 that served as Air Force One at the time President Kennedy’s assassination elevated Vice President Lyndon B. Johnson to the presidency. It’s in Ohio now but many Texans, led by the LBJ Foundation, want it relocated to Texas. It seems like Texas has the stronger case. That plane, on which President Kennedy made his final flight and on which President Johnson took the oath of office, is most historically connected to Texas and it should be displayed in Texas as a way to more fully tell the story it is so closely associated with. The one photo of that plane that most people in America would instantly recognize and identify is the photo of LBJ taking the oath in the cabin of the plane while it was on the ground at Dallas Love Field. It is doubtful Ohio has any claim to trump that.