The Arena Medicaid: To Expand Or Not To Expand

Texas has taken a serious stance against Medicaid expansion since Gov. Rick Perry decided not to expand Medicaid with Obamacare/the Affordable Care Act (ACA) in 2012. Governor Perry took this stance to avoid what many see as a failed system that would take away healthcare choice. According to some, this has led Texas to, “the biggest coverage gap in the country, with an estimated 761,000 resident’s ineligible for Medicaid and also ineligible for premium subsidies to offset the cost of private coverage in the exchange.” For a state of 28.70 million, 761,000 residents represents just 2.65% of the population that resides in this coverage gap.

What are the financial consequences of this gap and how is Texas currently resolving the issue?

In Texas, “adults without minor children are ineligible for Medicaid regardless of how low their income is.” (Norris, 2021). This causes an uncompensated gap where hospitals and other service providers provide services to individuals without insurance or a way to pay. The state then foots the bill. According to H.B. 3588 from the 78th Texas Legislature, Texas is required to reimburse a portion of uncompensated care. So, the state is not responsible for the full $5.5 billion in uncompensated care.

Economists at the Texas A&M Bush school of Government and Public Service urge politicians to consider the financial impact of Medicaid Expansion. In her work, Professor Dague, estimated a “cost of $525 per enrollee per month, the annual federal dollars brought to Texas would be $5.41 billion with a state share (before any savings and offsets) of just over $600 million.” This amount would just about match the $5.5 billion noted above in uncompensated care.

If Texas did not have the deal with the Trump administration, Texas would have to cover the full $5.5 billion dollars. If Texas expands Medicaid, $5.5 billion in uncompensated care would shrink down to around $600,000. Therefore, the pressure will be high for legislators to approve Medicaid expansion by 2022, when the uncompensated deal with the Trump Administration expires. However, there are more costs associated with this expansion than just insurance coverage and uncompensated care. With any expansion of government, there are ancillary costs for software, employees, pensions, and salaries.

Professor Dague states that this spending is minimal, where a 24% increase in Medicaid spending only caused a less than 1% increase to the state’s overall budget. State budgets will not be dramatically different after Medicaid is expanded. However, this estimate relies upon federal funding to always be available to this state program.

Can we rely upon the federal government to fund this expansion?

Texas is one of 20 states that sued to end Obamacare in 2018. That case, California v. Texas (2020) has slowly worked its way to the Supreme Court. After the changing members of the Supreme Court in the past few years, Obamacare is more likely to be repealed. While, California v. Texas is about the individual mandate, “the federal district court held…[Obamacare] is invalidated because the individual mandate cannot be ‘severed’ from the rest of the Act.” (Oyez.org, 2020). The very fate of Obamacare and all its provisions is on the line, including its funding for Medicaid expansion.

The financial benefits of expanding Medicaid would prove moot if Obamacare is repealed. Even if the Supreme Court holds with Obamacare in this case, with such a coalition of states lined up against Medicaid expansion, there is likely to be more arguments and fights against Obamacare. This could remove the funding source for the expansion of Medicaid. Making the states responsible for the entire cost of the expansion. There is a financial risk of $5.5 billion dollars annually to expanding Medicare because the Obamacare is likely to be chipped away by such strong opposition.

So, what other benefits would the expansion Medicaid help?

With only 2.65% of Texans in the insurance gap, the problems with America’s healthcare system do not lie in the lack of people covered, but in the overly burdensome and government created cost of healthcare, medicine, and health insurance. A study by Bankrate.com found that 59 percent of adults did not have the ability to cover a $1000 emergency expense.

Some would argue having medical insurance would mitigate the cost of these emergencies. By having insurance, people would be able to visit the doctor and take care of this bill. This is not necessarily true. Many people, even with insurance, utilize hospitals or emergency rooms as their primary source of medical care. It has led to what Dr. Jeffrey Brenner has come to call “hot spots” of high-cost patients.

Hotspots represent lower quality of care and higher bills. So not only do you pay more, but you utilize these services more. It is a cycle not stopped simply by getting everyone insurance. Out of pocket expenses can be in the thousands of dollars, and monthly premiums can cost many hundreds of dollars – even more for large families. Therefore, the individual mandate limits consumer choices. Individuals no longer have the right to choose their own healthcare. It limits their ability to control their future. It would be better for individuals to have the ability to take the money spent on monthly premiums and put it towards improving their lives in a substantive way, purchasing low premium/high deductible catastrophic coverage, or setting up their own Health Savings Account (HSA). This choice is best determined by free people who are better positioned than the government (at any level) to determine their own healthcare and health insurance needs.

By taking away this money and choice, government limits potential individual growth and self improvement. By expanding Medicaid, Texas would effectively buy into Obamacare and the individual mandate which costs the consumer more money. The 2.65% of Texans in the coverage gap would be placed deeper into a cycle of poverty with yet another charge for being poor. Expanding Medicaid is just another financial burden with no financial benefit in reducing the cost of healthcare for those who are financially desperate. Individuals know their own needs best and don’t need government to make decisions for them.

So, why is Medicaid expansion being pushed?

The economic principle of Risk Pooling holds that people pay for insurance to diminish the potential risk associated with sickness, damage, or other idiosyncratic risk in life. However, this system is threatened by people who make adverse selections. Where people choose not to participate in the risk pool because they believe themselves to be healthy and not at risk of serious health injury.

As a response the insurance providers can raise the premiums to cover the benefits associated with not-participating in the insurance program. These premiums are what most people pay, and they increase when fewer people participate. The goal of Medicaid expansion is not to focus on the healthcare industry’s inflated costs, but to require everyone to participate and pay into the health insurance industry to vainly reduce premium costs.

Does this work? What does the evidence say?

Since the inception of Obamacare and the individual healthcare mandate, Americans have been forced by law to participate in health insurance. According to the principle of risk pooling premiums should be lower or on a downward trend. This has not occurred.

According to Kaiser Family Foundation, the average single coverage annual premium in 1999 was $2,196, in 2009 it was $4,824, and in 2019 it was $7,188. That average annual premium is more than it cost to cover a family in 2001 (Kaiser Family Foundation, 2019, Figure 1.10). Medicaid expansion does not decrease the cost of insurance but forces people to pay into an overpriced system. This harms individuals and represents a huge financial risk for the state.

In addition, there is no evidence, even with the mandate, that people will enroll in these Obamacare programs. According to the Congressional Budget Office (CBO) the following table is how many people were expected to enroll in these plans compared to how many people actually enrolled. Many people have simply chosen to ignore the mandate and refuse to enroll, undermining projections made by Professor Dague and others of like mind. 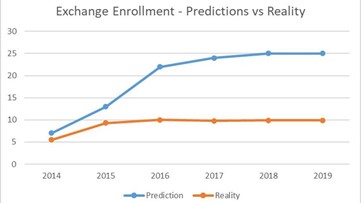 In a word: NO. The idea that expansion will necessarily close the coverage gap is an illusion and, over time, the Texas share of expansion costs would balloon leaving Texas taxpayers on the hook to cover $5.5 billion dollars annually in the expanded Medicaid costs and uncompensated care fees. Not to mention, the infrastructure needed to support this Medicaid expansion within the Texas Department of Health and Human Services. This poses a large financial risk for Texas taxpayers.

The benefits associated with insurance would help to cover people who are in need, right? No, up to 59% of Americans cannot afford a $1,000 surprise bill. This means many Americans are so financially strapped for cash, that the monthly expense of premiums along with the out-of-pocket expenses limits their financial opportunities and ability to make rational decisions for their future. All the more so after government mandates largely shut down the economy for the bulk of 2020.

The current expansion of Medicaid is based on the theory of risk pooling and limiting adverse selection of people who have decided to opt out of the insurance industry. This should, in theory, lower the cost of premiums. However, as the data shows from the Kaiser family foundation, it does not. In addition, existing programs are underutilized. Again, whether left to their own devices or in defiance of nonsensical government mandates, a free people will make their own choices about these things.

In Texas it is far better to let people plan for their own futures and make financial decisions to improve their lives in a substantive way. Expanding Medicaid harms people. Trying to force people to buy coverage they don’t want or cant afford takes choice away from people and tells them that they do not have the ability to make decisions about their own health. The longer we attempt to grow the government in this manner the less choice people will have, the more prices will skyrocket, people go without medicine, and the health of our nation will decrease as the cycle continues.

Just say “no” to Medicaid expansion and let the people be free to choose how they will handle their own health needs.